And wound up here

Archive for the tag “Writing”

Then One Foggy Christmas Eve

In an effort to stop failing at this blog, I have enrolled in a memoir writing class. We have weekly assignments, and I am really good at finishing a task as long as I feel like it. I’ve decided to post my assignments from the class here, so I can keep this blog current and also scare myself silly. There’s nothing quite like clicking “publish post” to make me feel instantly vulnerable and full of terror.

The writing for this week was “Write about your most memorable holiday and what makes it special to you” in 250 words. I got 312 words, which means that I can finish a task, but I might not always follow directions.

During Christmas 1993, I was newly separated from my first husband and living with my 2 year old daughter in a tiny, drafty rental house. Christmas sneaked up on me that year, and I had no money, no plans, and zero Christmas spirit. What I did have was an overwhelming sense of guilt, sadness and inadequacy. Christmas felt impossible to me; I was going to let it go.

Next door to me lived a young gay couple, Brad and Greg.  A few days before Christmas they came to my back door with a Christmas tree. “Do you want this?” Greg asked me. “It’s lopsided and we don’t DO lopsided.” They had an old rusty tree stand and 2 boxes of lights. They set the tree up for me and left.

Later that night they knocked again, this time with wine, angel food cake, and a CD of Christmas songs. Around the 2nd bottle of wine, Greg took out the chalkboard easel I had purchased for my girl, and meticulously drew and redrew 8 perfect reindeer on the chalkboard. Brad produced a gold calligraphy pen and some red ribbon. He wrote a note from Santa on construction paper, and at the bottom wrote, “PS, Prancer is my favorite.” Someone tied ribbons on the easel. Someone built a fire. They gave me a crystal bud vase, a flower, and the rest of the cake. 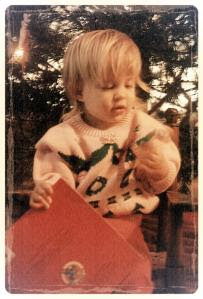 It wasn’t until several years later that I understood what a gift Brad and Greg were to me, and how their generosity and kindness has influenced my own family’s Christmases now. Back then, my girl had no idea how pretty her easel was, and she could not read Santa’s note. Our first tree had no ornaments, but that did not stop her from hauling her rocking chair in front of it, where it became her favorite place until the season was over.  And when I look at that picture and the few others I have from that first hard holiday, I smile, because my new friends gave us Christmas, and that tree was not at all lopsided.